I’ve known Ruth of Charly & Ben’s Crafty Corner for a few years now mainly through social media but we managed to meet in person a few time last year.

Ruth works a lot for Irish Modern Quilters, our on-line group as a main drive and also she took the position of chair of Irish Patchwork Society when it became vacant at the end of last year. All voluntarily! She has got a very busy quilting life and I admire her bravery!

Modern quilters Ireland had a quilt-a-long last year which was led by Ruth and she made a quilt top while writing brilliant instructions for it. It’s a 80″ by 80″ finished, rainbow rose. Very very large piece work. And I’ve got quilt it! And she said I can do whatever I want to 🙂

Those big squares are 9″ and that means a very big space to fill and they are kind of blending to adjoined fabrics. All are new to me.

Although Ruth said I can do whatever, this is her quilt and I think it should reflect her personality. I have seen quilts she made and this is what I think who she is through the quilts she has made.

The first thing I did was stitch in ditch around star/rose shape. With normal quilts, this takes a day at least but since there wasn’t much lines to be anchored in this quilt it was very very quick. In other words, I didn’t have much time to look at quit and think about what to do with quilting.

I thought this quilt shouldn’t have a lot of straight lines and something totally different was needed. When I stared at the centre star, the idea of putting butterfly came to my head. I am not good at repeating exactly same thing so they are not very symmetrical butterflies.

Because I thought the colour was an important essence of this quilt, I used threads to blend at the each section. However they were quite different colours so threads were only blending in a half way of four fabrics.

I needed to reconnect whole design as one at the white part. A large circle looked perfect for that purpose and I decorated inside with coloured thread and filled background with white thread. Later I changed some of flower designs and brought in different yellow thread which was more visible.

Then it took me a while what to do with the outer shape. The colour wheel… spinning… merry-go-round! Not with horses but with different animals. Irish ones!

Also I wanted to include one of her beloved dogs.

There were eight of them on each pentagon shape and I still had narrow diamond shapes to fill which I quilted with feathers because that round shape reminded me a dream catcher.

And it was the time again to connect all. All section were divided by circular lines and the sections above the animals were quilted with repeated design and below were with free style.

Now we are at the outer border which Ruth put some appliqué.

Then I really didn’t like it and I took out those stitches on the white fabric. And I moved on to quilt other parts.

There are some straight lines finally because curves just didn’t fit to the size there.

I somehow didn’t take any photos in between those two. What happened after I quilted straight lines were, I quilted feathers and put little Le-Moyne stars in whose small squares. And then I added more parallel lines which I filled with double ribbon candy and added star like shapes in triangles.

Now four corners. I added some feather decorations to the circles.

And then I drew parallel lines from star shape by a marker. Those lines gave me better view of those spaces and I added some dragonflies and circle shapes.

The remaining space was filled with echo lines and straight-ish lines.

I will show you rest of animals and finished results. 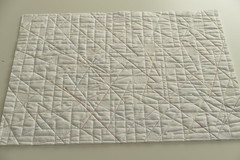 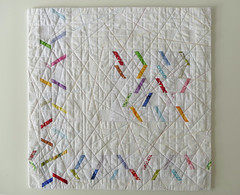