I made this quilt because I need something to make quick. Why? Because I needed to check if my machine was working fine.

She came back and I tested for a week or so. No problem except her motor occasionally made funny buzz. I was told to try for another week and that was the reason I needed something to make in quick.

Anyway, I have been admiring illusion quilts now and then but I never sit down to make a proper plan. I downloaded one of tutorial from Caryl Bryer Fallert which was sitting on my pc. And I decided to make it. By the way, she has fantastic patterns of various quilts if you are interested.

The first block I made was this and I wasn’t quite sure if I was doing it right. A lot of people on Facebook and Instagram said yes but I wasn’t still not quite convinced.

I went back to my drawing board and changed the placements of colour like below which looked better on pc but not with actual fabric. Too much blues are in a same place.

The first one looked better after making the second one so I made three more of it and played with them.

Interesting pattern isn’t it? Plans for the future project!

But for this week, I was determined to make a table runner. Added a thin red border and light blue border and quilted.

There are a lot of bulky seam bumps on this quilt and I avoided to quilt densely. The main part was quilted with meandering feather because fabric was the main focus. On the other hand borders were quilted with more style.

For the blue parts I used slightly teal blue thread from Wonderfil which blends well with either blue or green.

I think this has a bit of Christmas look, don’t you think?

And my sewing machine? I think she is behaving fine. The new motor she’s got is making a bit of noise occasionally seemingly. Somehow she need a new one after three years… Hope this one lasts longer. 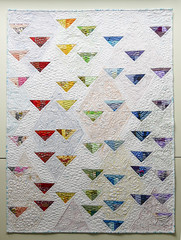 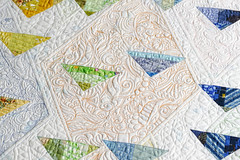