Back in early last December, I was contacted by Jonathan Nangle about his project. He is a composer and interested to make a quilt as interactive music installation.
Things to do with sound still fascinates me because I studied acoustic design at uni and worked at architectural acoustics field for six years before coming to Ireland. What I did was mostly physics side of sound rather than musical nor language but still something special with sound comes near to me, it grabs my attention. Well, not much more than quilts these days though!

This project is for the Spike Cello Festival 2020 at the Ark, in Temple Bar, Dublin. The idea from Jonathan was a quilt to make some music when touched. So there are some electrical devices embedded and that will be connected with wire or conductive thread on the surface.

I had heard of conductive thread but I don’t think I have seen it in action. Might have seen some samples at textile show making some lights but I never paid any attention to it. Asked Mr. Goole about it and figured it out how it works eventually.

And what design to suit the occasion?

This quilt I made in 2016 looked like to fill the purpose of being a sound device and image of fluidity of music.
The over all look had to stay abstract but I connected it with music with quilting.

Initially I was going to make the background all neutral colour and that required medium coloured circles to not have too much impact. And then I tested the conductive thread’s visibility on various colours. It is a really thick and dark grey thread and very visible on even on dark fabric. In other words, it is too visible on light fabric and not very pretty colour. I didn’t wanted that to be a distraction and decided to have darker circles on light medium background.
All those fabrics are light coloured batik from my shop.

And then quilting.
I added a re-stylised cello and musical symbols which were quilted with dark thread to show up enough. All the circles were quilted conductive thread this much.

Then fill those all the rest of space to somewhat to disguise and somewhat to decorate with lighter coloured thread.

And then all the rest was filled with matching thread including circles.

It’s going to be on display this Saturday, 8th at the Ark from 11 to 3.30. Come and touch it to see and hear what happens! 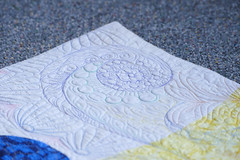 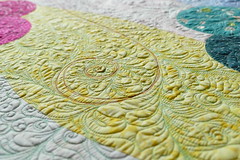 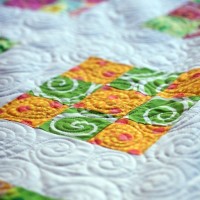 From beginner to artisan; sharing what we love about Janome sewing machines for sewing, creating and quilting.