I don’t know how it is 20th of December already but it is. It felt like Christmas was a far far away but it’s just around the corner now.

I went to Galway earlier this month to do a talk at the Western branch of Irish Patchwork Society. It was fun to talk about my quilts to the people understand! On the day they were having Christmas party too. I actually brought my hubby with me and we had a look around beautiful Christmas light up in the city centre on the night before. That might be a first time to do such a thing in Ireland for us.

Then the following day, I brought my shop to the beautiful Lisnavagh house‘s Christmas fair which is our neighbour. Last year we had so much snow on the same weekend but not this year! It was busy with a lot of people coming all day.

Do you remember I was talking about making pot stands from cut offs. Here is a sample. I brought them with me there and other small ones.

I made a custom tea cosy. The client wanted the spout to be not covered by the cosy. So this is my solution. What do you think?

That shape was a bit difficult to copy. After I drew several pattern on the PC and tweaking, paper pattern was made to fit it but when it was transferred to a quilted double layer of fabric, it wasn’t big enough. So I had to re draw and make. In the end I did it. Velcro tab to close the cosy around the handle.

And there were quilting. A lady needed a help to finish off her two quilts. They were both partially quilted but needed bit more.

On this one, she just wanted quilted on the border with some leaf shapes which was not a problem but it needed to be quilted both of inner and outer border because they were bit too wide not having quilting. I quilted with leaves pattern on the green and roses on the yellow.

Because of the print pattern on the yellow, quilting is not very visibly clear unlike much plainer green part. It will show up in a certain light and even you can’t see, the texture is definitely there.

The second quilt was a single bed size and made with a jellyrole. Very busy colourful quilt with a lot of metallic!

This was quilted along the sashing already and border and all those squares needed to be quilted. Since they are busy fabric, there were no point adding decorative quilting on the squares but if there is not enough quilting, the quilt top will move freely and may get unravel. Yes wadding may not need quilting up to 10″ but the quilt top needs it about 4″ at least. After wondering about the motives for a while, I settled down the first one came in my mind, orange peel.

This looks tedious job since I couldn’t quilt it as a continuous line due to the sashing but using a quilting ruler it is not a bad one to do because I can free motion quilt, i.e I can move to any direction I want. Yes there were 70 squares and stop and start of quilting, but it won’t take forever.

The border was quilted with feather pattern which shows up nicely, dosen’t it.

We have Christmas decorations up and out daughter’s first college exam is over. Little bit of time off now. 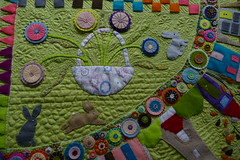 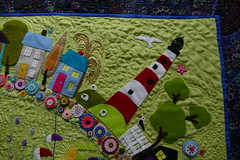