I made two quilts themed insects. One was firefly and the other dragonfly. And then I wanted to make another one but struggled to be inspired for a while until an idea of spider popped in my head( yes I know spider is not a insect strictly but hey).

I don’t admire them but sometime they leave impressions of beautiful and fragile things and I like it.

The idea of making the background with hexagon pattern was there from the start but I couldn’t quite figure out how it should look. That idea was left to mature in my head until I did get a vision a few weeks ago.

Each equilateral triangles are made of scrappy random strips up to 1.5″ wide and I inserted coloured super thin strips, .75″ wide here and there. Are those thin strips looks like spider web structure?

First I made mainly white one and then more blue murky looking one. And then green ones were made.

I knew the finished quilt size was 20″ by 40″ as same as previous ones but some how my brain didn’t engage the math properly and I made each triangles 5.5″ tall. Yes, that makes quilt’s width 20.5″ but quilting process shrinks it a lot and I need to make sure I have enough in the end. Rather than making each triangles bigger by .5″, I added 2″ extra on one side. That created non-symmetry look and I liked it.

There are terrible bulk here and there due to six points meeting as well as bunched up seam allowance of thin stripes. I did survive without ripping it all a part!

Quilting spider web was the easiest part as well as the patch of grass which was filled with graffiti grass land.

I added some grass hoppers and butterflies.

On the other hand, it took me a while to figure out how to quilt the white background. I wanted it looked like summer sky and if that was a paint I could just paint it with plain blue. But with quilting? This is my answer.

The above is the lower part which I filled with various width of ribbon candy. The below is the higher part which was filled with clouds and wind swirl pattern( which is difficult to see unless the lighting is right!)

After all the quilting was done, I added a large spider with fused applique guarding her web. The thinnest part was done with just quilting but the rest was two layer of fused applique. 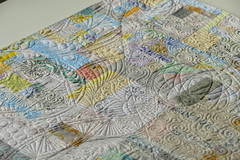 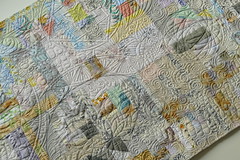