Really belated new year’s greeting from me here. Feeling of slight spring in the garden now!

What should I start with this year? There are some fabrics I bought a long long time ago and patiently waiting for me to do something with. Which one should I pick first? Hmmmm.

I had that blue grey large scale print with animals, a half yard of it. I really liked it but it’s a really challenging pattern. Big and directional print. There was no way cutting it up small but squares were bit boring. Maybe fan shape with those fabrics together?
My base idea was drunkard’s path crossed with grandma’s fan. But I didn’t want to have one fabric for the outer part of drunkard’s path.
The fan shapes needed to be a decent size and the diameter of the circle I choose was 12″ so the quarter circle would be 6″. And then strips of other fabric out side. And I wanted to give them decent length as well.

The each strip of fabric was 2″ and that made the diagonal distance of the block 12″. Yes it is not a normal way to measure any quilts but it made math a bit easier for me this time. With templates, size actually doesn’t matter.

I made some fabrics for the stripes to be continuous over two or three blocks and others mixed.
I could make this quilt a square shape but sometime around at this stage, those stripes reminded me of five coloured stripe banner in Japan. I decided to make this quilt a runner shape.

Next decision was how to finish top and bottom. Stripe all the way? That might loose the focus on the main fabric? Since the top part was already stripy, I added more stripes while bringing in one paler background fabric to let them float. And the bottom part was just one fabric to make it more united.

And then there was a border. Of not so even width….

That was because that main fabric reminded me of an ancient Japanese drawing, ‘Cho-ju giga‘ and like any scrolls, it needed a bit wider edge on left and right. I thought.

Anyway, then the quilting.
All the colourful stripes were quilted with fluid pattern to bring in some movement. Because they were banners in my head and banners needed to be airy and moving, don’t they.
Each fan shapes got lines to represent folding fan’s bone.
The background at the top was divided in much smaller sections and filled with dense quilting.
Initially, I was going to fill up with doodles at the bottom but since I had it at the top already, I had to come up with something else. Bamboo forest was a tedious pattern with a lot of lines stopping and starting but I really like the how it went!
The border was filled # pattern which is a traditional Japanese pattern as well. 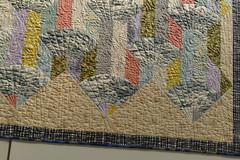 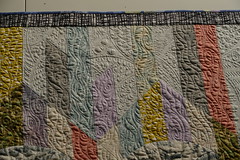